Backable: The Surprising Truth Behind What Makes People Take A Chance On You 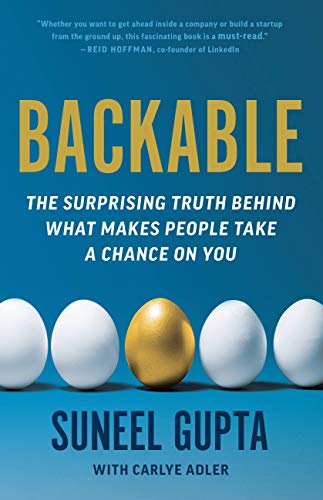 “No one makes it alone. But there’s a reason why some people can get investors or bosses to believe in them while others cannot. And that reason has little to do with experience, pedigree or a polished business plan. Backable people seem to have a hidden quality that inspires others to take action. We often chalk this up to natural talent or charisma…either you have “it” or you don’t. After getting rejected by every investor he pitched, Suneel Gupta had a burning question: could “it” be learned? Drawing lessons from hundreds of the world’s biggest thinkers, Suneel discovered how to pitch new ideas in a way that has raised millions of dollars, influenced large-scale change inside massive corporations, and even convinced his 8-year old daughter to clean her room. Inside are long-held secrets from producers of Oscar-winning films, members of Congress, military leaders, culinary stars, venture capitalists, founders of unicorn-status startups, and executives at iconic companies like Lego, Method, and Pixar. Backable reveals how the key to success is not charisma, connections, or even your resume, but rather your ability to persuade others to take a chance on you. This groundbreaking book will show you how.” — Goodreads.